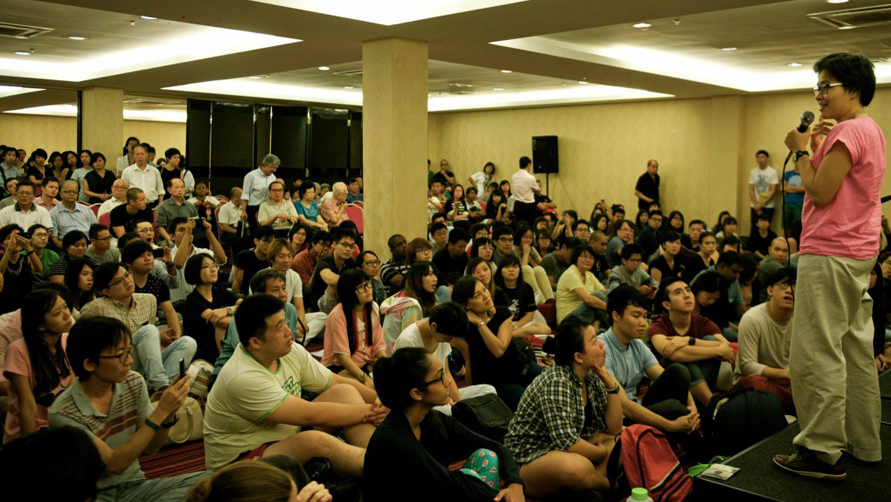 Background
On 10 September 2014, To Singapore, with Love was banned from public screenings in Singapore. One of the reasons cited was that it “undermined national security”. Immediately, on the same day, 40 artists, filmmakers and civil society activists responded with a statement asking MDA to reconsider the ban. A week after the ban, a few hundred Singaporeans took chartered buses across the border to Johor Baru, Malaysia, to catch the film. Pin Pin subsequently appealed against this decision, but the appeal was rejected as the Film Appeals Committee felt the film was “one-sided”. The film is currently screening privately in Singapore, as is permitted, and publicly abroad. The film is allowed for screening in Singapore tertiary institutions if certain conditions are met.

In July 2015, a signed, limited edition DVD was released for sale outside Singapore. During the DVD’s production, the Media Development Authority of Singapore (MDA) clarified that the DVD cannot be mailed overseas from within Singapore as it could constitute “distribution”, which is not allowed for Not Allowed for All Ratings (NAR) films. MDA also clarified that the producer cannot release the film on the web through a VOD portal so that it could be accessible to all, including those from Singapore for the same reason.

Hence, To Singapore, with Love is accessible to those logging in from a non-Singapore IP address via Vimeo.

Outside Singapore, the film can be seen freely with no restrictions. Sold-out screening tours have been organised in USA, UK, Hong Kong, Taiwan and Malaysia. It has also screened and won awards at film festivals in Korea, UAE, Thailand and Malaysia. If you are an overseas college, library, festival or conference and would like to show or acquire the film, please email to.singapore.with.love@gmail.com to enquire about the correct licence.

International Press
Jeu De Paume “Tan Pin Pin. No Vacation From Politics”The New York Times “Banned Film Reunites Singapore with its Exiles”The Online Citizen “The making of a new political folklore”The Straits Times “Exiles shouldn’t get chance to air self-serving accounts: PM”The Independent (UK) “Have you heard about the film Singapore has banned its people from watching? Well, you have now”Moviemaker “Love in Exile: A Cinematic Pilgrimage to Watch Tan Pin Pin’s To Singapore, with Love“

Statement by Tan Pin Pin in response to the ban
To Singapore with Love (2013) was slated to screen with my other films Invisible City (2007) and Singapore GaGa (2005) at the end of September 2014, in a triple-bill presented by National University of Singapore (NUS) Museum, an institution that I have had a long working relationship with in relation to my previous films.

Now the screenings will not take place.

I am very disappointed by the MDA decision to ban it — for myself, and also what it means for Singapore. Like many of my other films, To Singapore, with Love took shape organically. I was making a video about Singapore’s coastline from afar. In the process of researching the idea of being outside, I stumbled upon Escape from the Lion’s Paw (2012), a book of first-person accounts by Singapore political exiles, people who remain outside the country, but not by choice. I decided to interview one of them in Malaysia. I was so moved by her account that I decided to change focus and To Singapore, with Love was born. Like my other films mentioned above, this film is a portrait of Singapore; unlike the others, this film is shot entirely outside the country, in the belief that we can learn something about ourselves by adopting, both literally and figuratively, an external view.

For this film, I traveled to England, Malaysia and Thailand to interview the exiles to find out how they have lived their lives away from Singapore. Some have not been back for more than 50 years. They talk about why they left, but they mostly talk about their lives today and their relationship with Singapore. They show us the new lives they have created for themselves. One shows us around his noodle-making factory, we visit the law firm of another and play with the children of yet another exile. We also attend the funeral of one of them. Finally, we observe a family reunion that takes place in Johor Baru, the twinkling lights of Singapore a short distance away. The focus is on their everyday lives. These exiles all have different ideological positions and are of different ages; some are communists, others are activists from the Christian Left, yet others are socialist politicians or former student activists. But their feelings for Singapore are intense and heartfelt, albeit sometimes ambivalent, even after so long away. Those feelings (more than the circumstances of their exile, or even the historical “truth” that led to such exile) are what my film predominantly focuses on, because I feel that many viewers might relate to those feelings.

I made this film because I myself wanted to better understand Singapore. I wanted to understand how we became who we are by addressing what was banished and unspoken for. Perhaps what remains could be the essence of us today. I was also hoping that the film would open up a national conversation to allow us to understand ourselves as a nation better too.

I am therefore very disappointed that my film is banned. By doing this, MDA is taking away an opportunity for us Singaporeans see it and to have a conversation about it and our past that this film could have started or contributed to. It is vital for us to have that conversation on our own terms, especially on the eve of our 50th birthday. We need to be trusted to be able to find the answers to questions about ourselves, for ourselves.

It is my deepest regret that we cannot have such a conversation here today. That conversation did start when some Singaporeans saw it at film festivals overseas. Some of the reactions include; “Tender and searching” “Extremely moving and thought-provoking” and “A Must see”. Now, the irony that a film about Singapore exiles is now exiled from Singapore as well – this is not something I ever wanted or hoped for.

I hope to be able to show it in Singapore one day, and may re-submit for a rating in the future.